Written by administrator Published on June 15, 2021 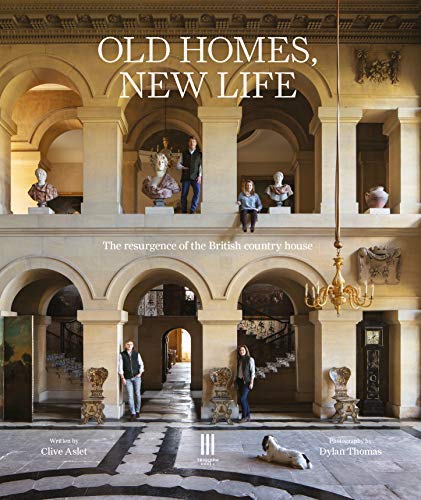 This book is a sumptuously produced journey around 12 privately-owned country houses, asking what it is like to live in such places today. What role do they play in the 21st century? For many years after the Second World War, the country house was struggling. Now a new generation of young owners, often with children, has taken over. They’re finding innovative ways to live in these ancient, fragile and poetic places. While they treasure the history and beauty of the houses, they’re also adapting and enhancing them for a modern era. Old Homes, New Life is a behind-the-scenes account of today’s aristocracy, as they reinvent the country house way of life. Each family does this in its own way, maintaining the tradition of individualism, even eccentricity, which is so much associated with country houses. Dylan Thomas’s superb yet intimate photographs capture both the inhabitants of these houses and the spaces they occupy – from State dining to family kitchen, walled garden to attic. This feast for the eyes is accompanied by an equally mouth-watering text by Clive Aslet, based on interviews with family members and his long experience of the subject through his years as editor of Country Life. The result is an exclusive tour of a dozen spectacular homes.

Experience the splendor of country houses in the 21st century.

From the introduction by Clive Aslet

This is a book about twelve country houses. Many country-house books celebrate the subject’s long history and ancient architecture; this one looks at a different aspect. How do people live in them today? How are these exceptional places, with all their splendours and inconveniences, their masterpieces and maintenance issues, faring in the twenty-first century? And what do they mean – to the owners, to the communities in which they are embedded, to the visiting public? The values of the age hardly seem to be in tune with ancient seats of privilege, filled with impractical furniture, and yet we remain gripped by the idea of the country house. What do the families for whom these extraordinary buildings are home make of the conundrum?

Country houses demonstrate the importance of home. They remain a symbol of longevity, owned by families who, with some confidence, can expect that their descendants will continue to own and live in them many generations hence.

“Old Homes, New Life offers a rare glimpse inside twelve privately owned country houses that have been cherished homes for hundreds of years.

An exclusive tour of twelve spectacular country homes, celebrate each homes long history, ancient architecture and meet the families that live there.

Detailed architectural analysis and history of each country house.
Exclusive interviews with family members who live here, most of them over 500 years.
Dylan Thomas’s photography blends the interiors and exteriors with photographs of family life.
Illustrates the joys and perils of living in a country house in the 21st century.
Shows how each family survives, prospers and makes money to support life in their ancient house.
Records today’s aristocracy, reinventing the the country house way of life.

Glimpse into another world. A world of armory halls, moats, private chapels and walled gardens.

Lucy Chenevix-Trench’s family have been at Madresfield Court, in Worcestershire, for nine hundred years. It may be this exceptional longevity that makes it one of the most romantic country houses in Britain; or is it the make-over that it was given in the Victorian period, which added turrets and hidden courtyards with élan – and little regard to the building that went before, except in preserving the moat.

Pictured: Marble busts are displayed against tapestry and panelling in the ante room.

Hopetoun House entrance looks towards the Firth of Forth and enfolds the visitor in the arms of two quadrant wings, ending in pavilions; like the courtship display of a peacock, the object is less to welcome than to impress. Hopetoun is regarded as Scotland’s most handsome country house in the Classical style, following the demolition of Hamilton Palace in the 1920s.

Pictured: The State Dining Room, created from a bedroom and anteroom in 1821; King George IV lunched in it the next year on turtle soup and three glasses of wine.

To the Devons, Powderham is, as Charlie puts it, “simply a family business. Certainly the castle has mystique, grandeur and beauty, but it always had to be run as a business.’ Handling the transition between the generations is “what all family businesses have to do,” as well as, in due course, succession planning.

Pictured: On the battlements of the castle, Torquhil contemplates the future. “If for some reason I can’t do something, my son will do it. Does it matter if I do it today, or if I do it in thirty years’ time? Not really.”

Country houses are more than objects of beauty and history to be admired. They’re family homes, working estates, supporting thousands of livelihoods and closely guarding an ancient way of life.

The National Park helps preserve the beauty of the South Downs, and it’s part of the Firle offering. “It’s a beautiful place, but not Blenheim Palace. We’ve 6,000 visitors and it’s difficult to imagine there being more. People come here to go for a walk on the Downs, to get married, go to Glyndebourne or have a meal in the pub or hold a corporate event.”

Pictured: The stables and riding school are Regency; the latter now contains display kitchens for the TV series, Bake Off: The Professionals.

Grimsthorpe has been a quiet estate with a restaurant whose function fulfils the Charity Commission’s objective to offer food as terms of the Trust. “We need a restaurant open evenings to satisfy the people who come to see the collection in the gallery.” In uncertain times for the rural economy, the object is to move from traditional sources of income, agriculture & rental property into tourism.

Pictured: Shooting isn’t vital income but allows for a gamekeeper; wildlife does better with predator control.

Doddington opened to the public one day a week in 1954, a provision of grants. Now, 30,000 visitors tour the home yearly. It closes in autumn & opens the month before Christmas, 5 days a week. This makes a small dent in running costs. In the last decade, to boost the modest income, the farm buildings were developed into a farm shop, which has been expanded twice.